Everything You Need to Know About Banner Photoelectric Sensors

banner photoelectric sensors there are no stupid questions
Posted by: tmccarty@wsimarketingupside.com on 11/26/2020 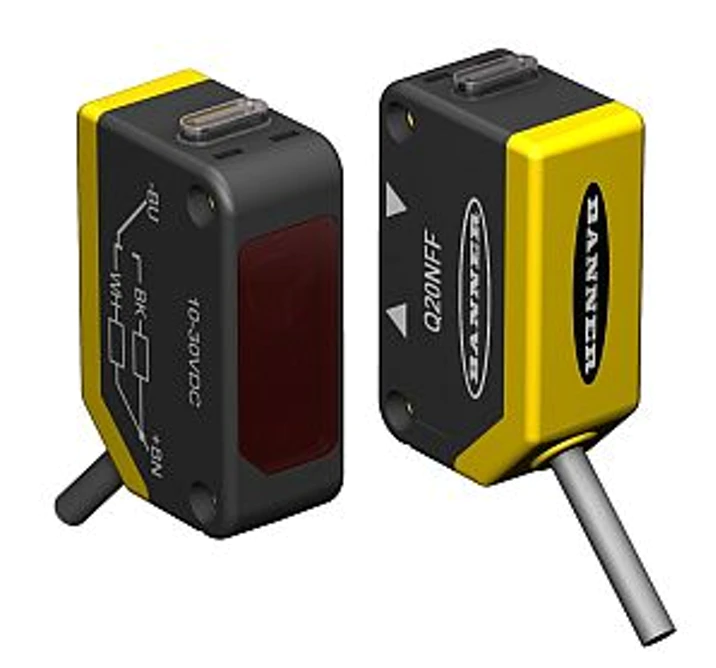 Banner photoelectric sensors and those from other brands, are one of the backbones of modern automated processes. They can be found in everything from household garage door opening systems to advanced automated factories. A photoelectric sensor has one primary task: measure light levels, or changes in light intensity, then trigger an output or event based on the detected levels.

There are several different ways of accomplishing this, and each method will be better suited for various applications. So, in this article, we'll cover how photoelectric sensors generally work and the different implementations and their attributes.

I. How Banner photoelectric sensors work

The basics of photoelectric sensors tend to be the same, regardless of how they operate or what applications they're used in.

1. A modulated LED is used to beam light (usually outside human sight range) towards the target being measured.
2. The light bounces off the target and is received by a nearby phototransistor, which detects the light levels.
3. The received light signal is passed through an amplifier, and then a signal converter which verifies the light is from the LED, then process the results.
4. Based on internal logic systems, the sensor then triggers the appropriate output or event based on light levels.

As a simple example, automatic garage doors have sensors continuously beaming a steady light beam parallel to the ground beneath the door. If the beam is interrupted in any way, changing its light intensity, door closing procedures are stopped, preventing objects or people from being hit by the closing door.

Depending on the circumstances, there are three primary ways that a phototransistor may detect and measure light.

Proximity mode, also known as diffused mode, is the most simple and basic light detection method. Banner photoelectric sensors which utilize proximity mode include both the light transmitter and receiver in the same unit, making them small and compact.

Proximity mode sensors have no reflectors or separate receivers; they simply passively measure the amount of light being reflected off objects in front of the sensor. However, this method means that they have limited range since the undirected scattering of reflected light will quickly diffuse it. Their effectiveness can also be affected by aspects of the target object, such as color, size, and finish.

None the less, they are popular and commonly used due to their low price, ease of implementation, and small footprint.

A couple of different variations on this design exist:

Many diffuse sensors used today utilize background suppression technology, which means they ignore objects past a certain distance. This boundary may be fixed or adjustable through mechanical means or by electronic sensing. This functionality eliminates the possibility of an object outside of the sensor's range falsely triggering the sensor's output.

In Diffused convergent beam mode, both the emitter and the receiver are focused on an exact point in front of the sensor, creating a small monitored area. These sensors have greater reliability and precision within the monitoring window while ignoring anything closer or further away.

This light-sensing mode is similar to proximity mode in that both the emitter and sensor are in the same unit. Still, with one key difference: it utilizes a reflector opposite the emitter to send the beam directly back to the sensor. If an object passes through the beam, it's detected and measured. This gives them a steady predictable baseline for sensing and eliminates some variables such as color and finish, which can negatively affect the sensor's operational range.

Overall, these sensors are only moderately more expensive and challenging to implement than proximity mode sensors while having greater range and reliability.

In some cases, retro-reflective Banner photoelectric sensors will utilize a polarizing filter on the sensor and a polarizing reflector. This prevents an incredibly shiny or reflective object from being "mistaken" for the reflector.
Transparent objects may present challenges for these sensors, although they can be built with a low hysteresis circuit capable of detecting more minute changes in light. Retro-reflective sensors may also utilize foreground suppression systems similar to those in proximity sensors to prevent false readings.

The original and most reliable photodetection method is thru-beam mode, which puts the emitter and the sensor in different opposing housings. Rather than relying on reflections, the LED light is beamed directly towards the sensor. This increases costs and operational footprint, but these Banner photoelectric sensors are by far the most reliable and allow the longest operational sensing range.

Another variation places both emitter and receiver in the same housing but utilizes multiple sensors to create a grid of photosensitivity. This is useful when covering particularly large areas, such as motion detection systems.

Also, thru-beam photoelectric sensors may utilize fiber optics, rather than directly shining a light on the target. This is generally used when measuring particularly small objects, which would be imperceptible to other types of light sensors. These fiber optic systems can be made of either glass or plastic. Plastic fiber optics can only use light within the human range of vision and are generally less reliable. Glass is significantly more expensive than plastic but can utilize IR or UV light and have better range and sensitivity.

The types of sensors described above are designed for general purpose use, capable of detecting a wide variety of light levels and condition changes. However, in some cases, more specific and specialized light sensors may be called for.

These are some of the other variations available.

Frequently used in manufacturing for quality control, photoelectric sensors can be tuned to look for a very particular wavelength of light (color) or even multiple shades. Some units can detect up to ten colors of light, or more.
These sensors can also be useful for item tracking, such as marking different manufacturing stages with different colors.

Many objects, paints, inks, and other materials may be luminescent when exposed to ultraviolet light. So, these sensors use UV beams to detect luminescence. Luminescent marks are often used in quality control, and they can also be used in a variety of QC applications.

A variation on color sensing, contrast sensors are explicitly looking for variations in the color on the object being targeted. They can be used to verify color in situations where specific hues (such as registered Pantone colors) are required or for sensing registration marks on packaging.

These are your traditional "motion sensors" and have both passive and active variations. Passive IR sensors have no active light emitter; rather they are trained to expect specific IR (heat) ranges in their receptors. If an object passes by which is a different temperature than expected, they activate. Such sensors are common in alarm systems and can also control systems such as automatic doors.

Active variations on the technology also exist, emitting IR beams along with detecting environmental heat. These are most commonly used in situations where objects needing to be detected may not have a substantial heat difference compared to the environment.

Finally, large numbers of emitters and sensors may be used to create a grid of light and sensing area. These have many uses but are typically seen in situations where they need to count many smaller items in an area. They can also be used to detect and maintain safe areas around equipment, triggering alarms, or other safety measures if someone or something intrudes into an unsafe zone.

TSI Has Your Automation and Motion Control Solutions

Since 1978, we've been on the cutting edge of industrial automation, motion, and control for manufacturing systems. We carry a vast in-house inventory of products, including Banner photoelectric sensors, and have numerous experts on staff to help you solve your challenging sensing applications.